Rhododendron festival is a community-based festival organized to celebrate the blossoming season of this majestic flower.

The festival is organized at the royal botanical garden located at Lamperi, on the way from Thimphu towards Punakha. During the festival time, you will be able to view 38 of Bhutan’s total 46 species of rhododendrons. 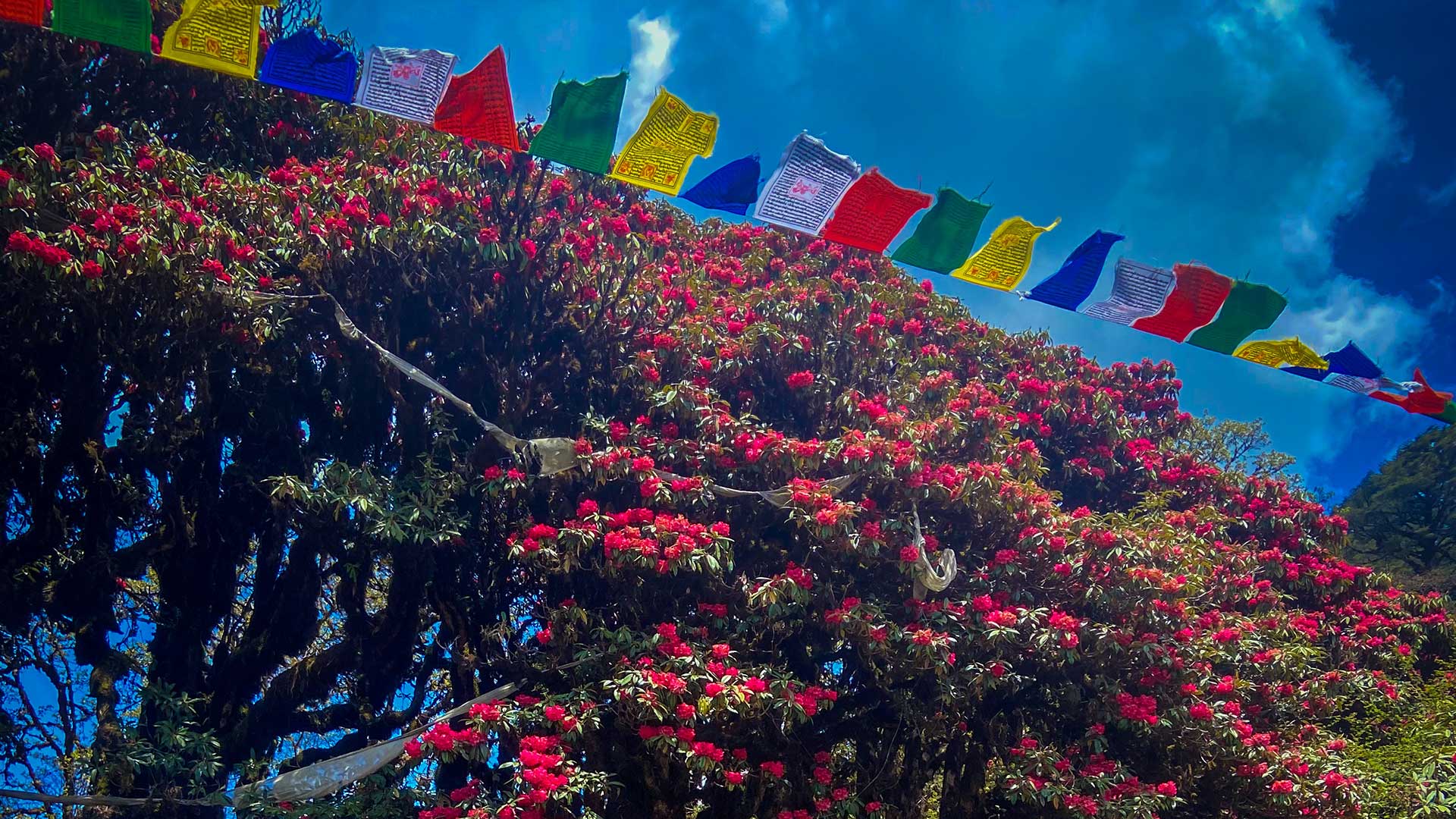 Welcome to Bhutan. Guide and driver from See Bhutan Travels will pick you up from Paro international airport. Enjoy your lunch from Paro and drive towards Thimphu, the capital city of Bhutan. Towards evening pay visit to Memorial Chorten.

Memorial Chorten: Located in the heart of Thimphu city, it was built in 1974 by Her Majesty the Queen Mother Ashi Phuntsho Choden in memory of her son, Third King Jigme Dorji Wangchuck. The three-storey Chorten houses several relics such as Phurba Lhatshog, Kagay, Khrowo Nampur Gyalwa, Guru Tshengye, and Khenlop Chesum. The Chorten is today the spiritual nerve centre of the city.

Today we will be driving towards our festival venue located at Royal Botanical Garden, Lamperi about 35 km drive from Thimphu city. We will proceed via Dochula pass. On a clear day, you will have a beautiful view of snowcapped mountains of Himalaya. The pass is also decorated with hundred and eight stupas built in the honor of 4th king of Bhutan for his service to the country and his subjects.

Further down the pass is beautiful venue of the festival amidst the rhododendrons in full blossomed. Communities and school children gather here to celebrate this festival with varieties of folk dances and mask dances. Food stalls are set up for you to taste authentic Bhutanese foods and handicrafts and book stalls are also on the showcase in case if you want to shop.

During this festival you will get chance to view almost 38 species of rhododendrons of total 46 species available in Bhutan.

Towards evening we will drive towards Punakha for the night.

Today we will dedicate our day to explore Punakha valley. We will begin our day with a hike to Khamsum Yulley Namgyal Choeten, followed by visit to majestic Punakha Dzong and Chimi Lhakhang.

Khamsum Yuley Namgyal Choeten: Located in Kabesa Gewog, about 7 km drive from Punakha town, the choeten was built with the sponsorship of her Majesty the Queen Mother Ashi Tshering Yangdon Wangchuck between 1992 and 1999 under the guidance of Dilgo Khyentse Rinpoche and Lam Sonam Zangpo. The three-storey choeten contains the images of Dorji Phurba on the ground floor, Khrowo Khamsum Namgyal on the first floor, and Khrowo Nampur Gyalwa on the second floor.

Punakha Dzong: The Dzong is situated on a stretch of a land where two rivers – Phochu and Mochu – meet. The dzong was built by Zhabdrung Ngawang Namgyal in 1937 and named it Pungthang Dewa Chenpai Phodrang, the palace of great bliss. Later it became the final retreat palace for him. The first monarch, King Ugyen Wangchuck, was crowned there and it served as the capital of the country until 1955. Today it serves as the winter residence of the Central Monastic Body. The sacred relic Rangjung Kharsapani is also kept in the Machen Temple inside the dzong.

Khemae Lhakhang: Located on a hillock in Lobesa (Punakha), the temple was built in 1499 by Lam Ngawang Chogyal, the cousin of Lam Drukpa Kunley, on the spot where the latter subdued a demon who was running away in the form of a dog. Lam Drukpa Kunley buried the demon and said there was no dog now (khe – dog; mae – no). Hence, the temple came to be known as the “temple of no dog”. Today however it is pronounced as Chimi Lhakhang. The temple contains the bow and arrows of Lam Drukpa Kunley and a phallus to bless the visitor.

3. Paro Ta Dzong (national museum): Located on a spur above Rinpung Dzong, five and a half kilometres’ drive from Tshongdu town, the dzong was built in the mid-17th century as a watchtower overlooking Rinpung Dzong by Lanyongpa Tenzin Drukdra and Chogyal Migyur Tenpa. The circular Dzong houses the National Museum of Bhutan.

Another interesting program of our tour is hiking to Taktsang monastery. Taktsang monastery to Bhutan has become like an Eifel tower to Paris. The hike on average will take around 6 hours in total. Horse riding facilities are available (own expense) till view point while hiking up towards the monastery.

History tells that, on this very cliff where the monastery stands today, Guru Rimpoche, the great Buddhist saint flew from Kurtoe Singye Dzong (located in eastern Bhutan) on a back of Tigress to subdue the demon who was opposing him from spreading Buddhism in Bhutan. Hence the name Taktsang, Tigers Lair or nest derived.

After subduing, Guru Rimpoche meditated here for 3 years. The monastery was later built in 1694 by 4th Druk Desi (secular head of the country), Gyalse Tenzin Rabgye.

Tragically, the monastery was gutted down by fire in the year 1998 but soon it was restored to its former glory.

Your Bhutan tour comes to an end today. After breakfast, your guide and driver will see you off at Paro international airport. 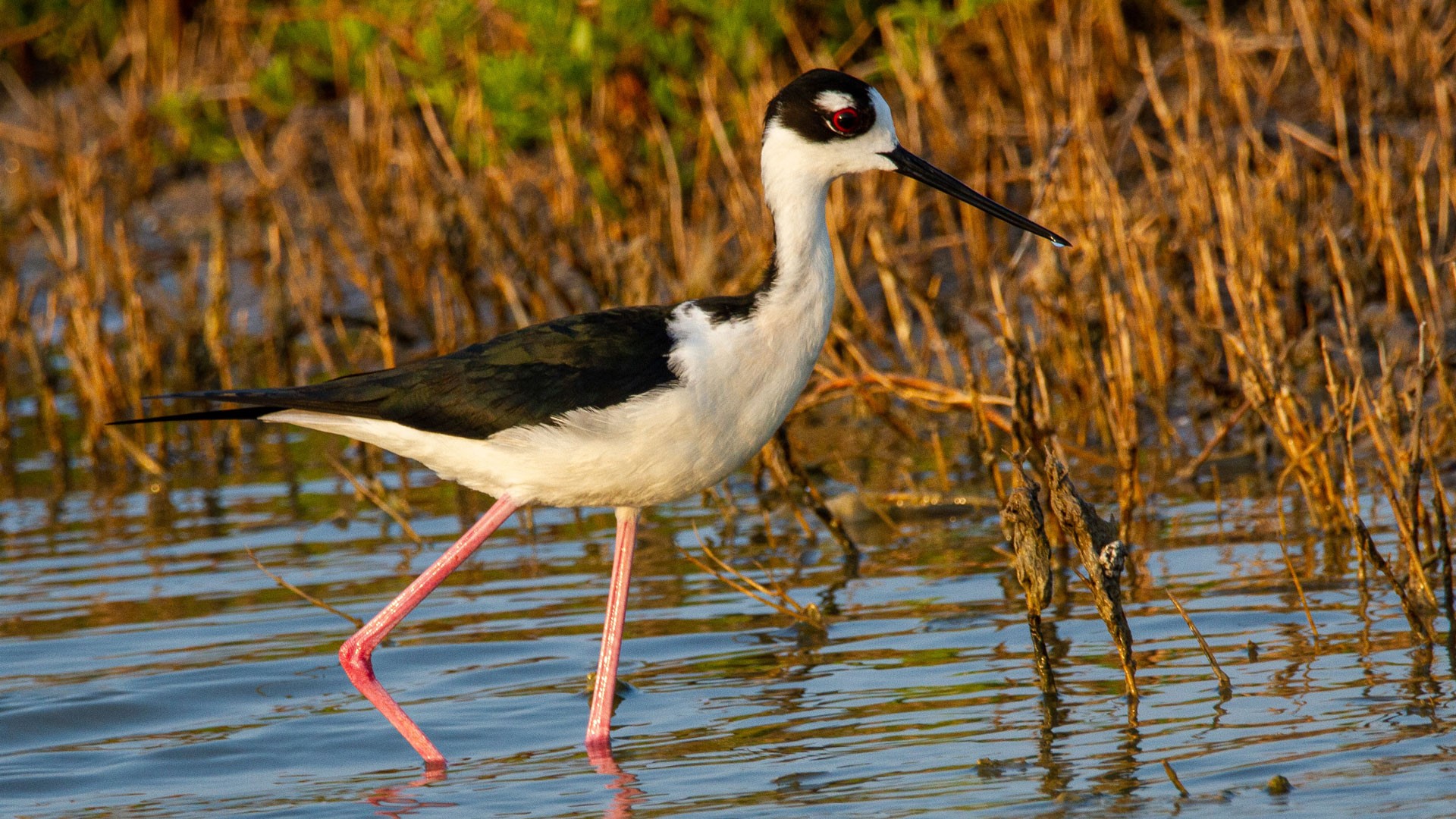 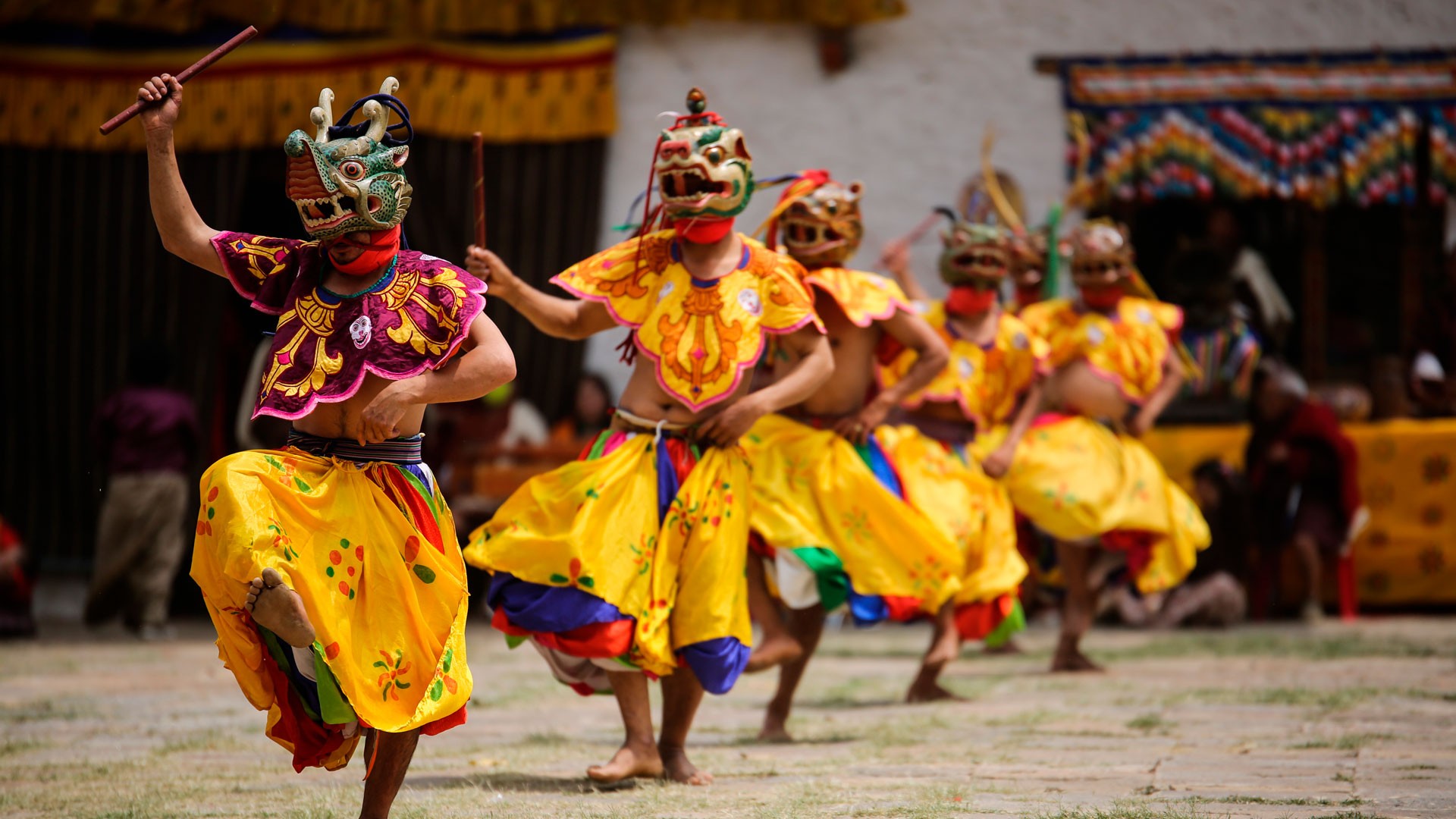 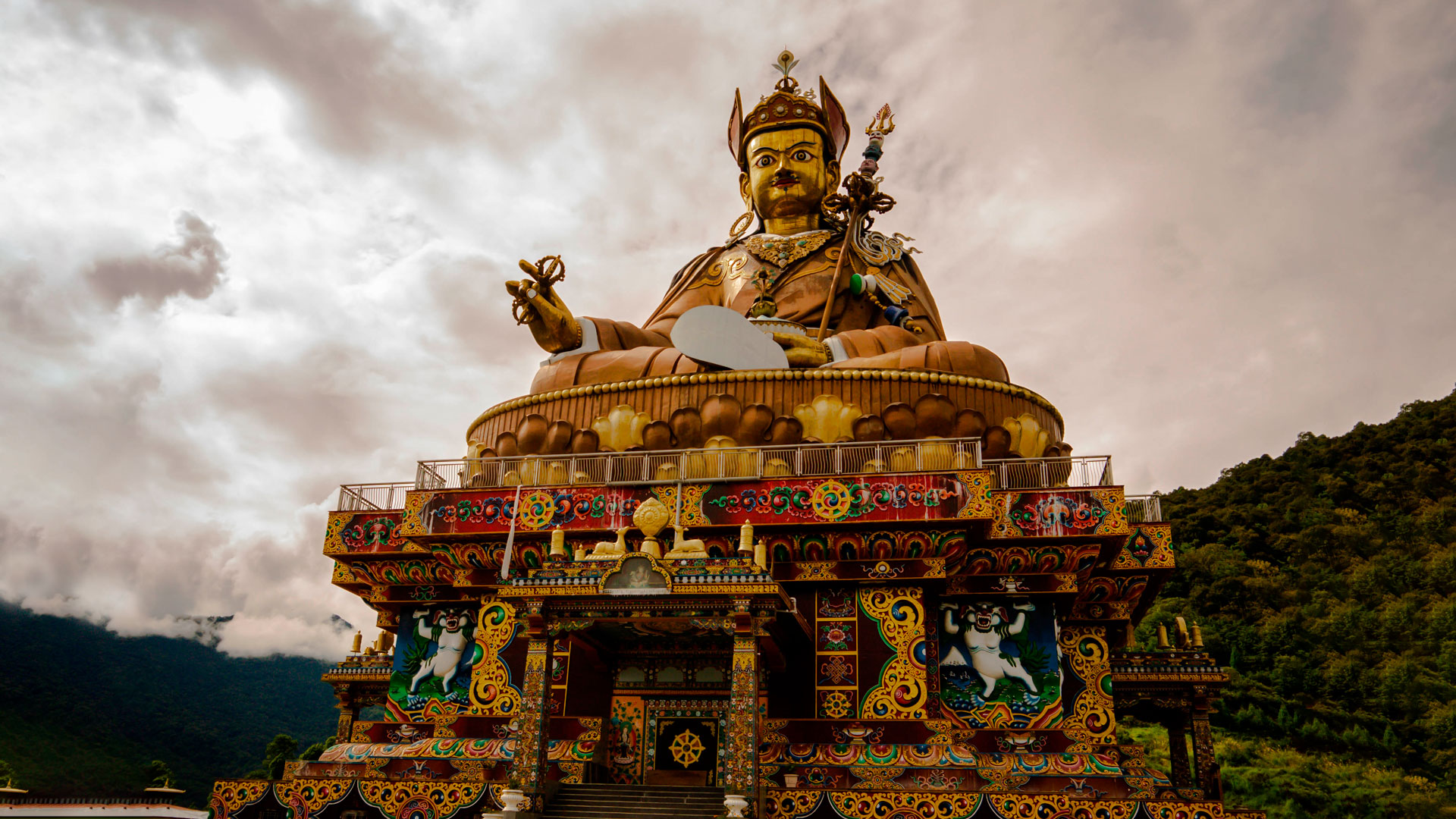 Paro Tshechu is held every year in spring season, towards late March or Early April for 3 days. Highlight of the festival includes unfurling of large Thongdrol (scroll painting) of Guru Rimpoche…